In the vaporizing gas drive, the injected fluid is generally a relatively lean gas that contains mostly methane and other low molecular weight hydrocarbons. Sometimes the injected gas in this process contains inert gas such as nitrogen. The intermediate weight hydrocarbons from the reservoir oil vaporize into the injected solvent. Under proper conditions this enrichment can be such that the injected fluid of modified composition will become miscible with oil at some point in the reservoir. From that point under idealized conditions, a miscible displacement will occur. In this process miscibility can be achieved with natural gas, flue gas, CO2 or nitrogen, provided that the reservoir pressure is above the minimum miscibility pressure.

Usually a pseudoternary diagram is used to describe MCM displacements. In the process description using ternary diagram it is assumed that thermodynamic equilibrium exists between the different phases. This assumption is generally thought to be valid at reservoir displacement conditions where advance rates are very low. Suppose that the injected gas (pint ‘S’ in Figure 5‑16) that is mostly consist of light component C1. The point ‘O’ represents the reservoir oil. As mentioned before oil in-place and the injected gas are not miscible at the first contact as the dilution straight line between them pass through the two phase envelop. The miscibility development operates conceptually as follows:

It is quite evident, that the dilution path must go through the critical point, as it is the only condition that equilibrated phases lose distinctions, and a continuous transition from gas to oil can be achieved without any phase boundary. 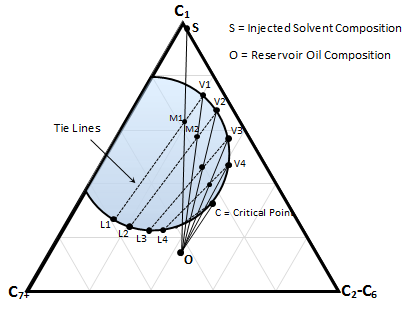 In the vaporizing gas drive there is a transition zone, the miscibility is achieved at the front of the advancing gas, the gas composition varies gradually from that of the injected gas till reaching the ‘critical point composition’.  Then it miscibility displaces the original reservoir oil in a piston-type manner. No phase boundary exists within the transition zone. 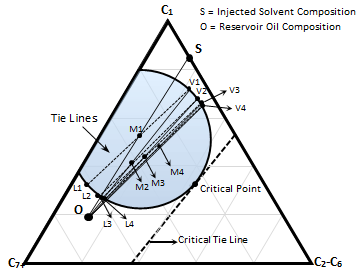 Figure 5-17: Schematic of an Immiscible Displacement

Figure 5‑17 shows a schematic of an immiscible displacement. The injection gas (solvent) ‘S’ does not achieve multiple contact miscibility with oil ‘O’. The initial mixture ‘M1’ is the first mixture after contacting of the gas ‘S’ and oil ‘O’. The mixture is split to gas V1 and liquid L1. The gas phase will flow forward to form mixture M2, and so forth. This gas is being enriched in intermediate components at the leading edge of solvent-oil mixing zone as discussed before. But enrichment cannot proceed beyond the gas-phase composition given by the tie line whose extension passes through the oil ‘O’ which is called Limiting tie line. In other word enrichment of the advancing gas is limited by the tie line (V4-L4 here) which if extended goes through oil ‘O’.

Example 5‑3
Using Figure 5‑4.a, find the minimum miscibility pressure of the n-decane and methane at T = 160°F.

Miscibility by the vaporizing gas drive mechanism can be achieved using nitrogen or flue gas that contains about 88% CO2 and 12% N2. flue gas is generated by burning hydrocarbons with air.

The gas composition appears to have no effect on achieving the miscibility state on vaporizing gas drive as it is fully controlled by the oil phase.

Relatively high pressure is required for most oil for the vaporizing gas drive process. So this process is limited to reservoir depth that will permit the use of pressure in excess of 3000 psi. reservoirs with under saturated oil with a high concentration of intermediate hydrocarbons (C2-C6) are the first candidate for this process.