Beginning with the industrial revolution of the early nineteenth century, man has turned more and more to the use of mineral fuels to supply the energy to operate his machines. The first commercial well drilled solely for oil was completed in the United States in 1859. Following the success of this well petroleum production and processing rapidly grew into a major industry in United States. Today, in satisfying the world’s energy needs, fossil fuels playing the prominent role. Although their share in the energy mix is expected to fall, it remains over 80% throughout the period to 2030. The leading role in the energy mix will continue to be played by oil, with its share remaining above 30%, albeit falling over time (Figure 1‑1). 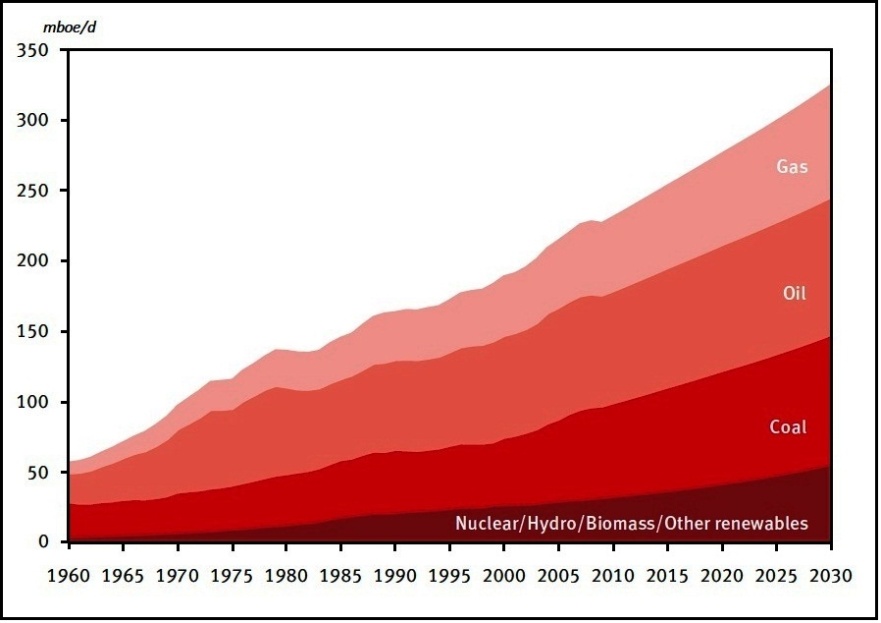 Today petroleum is used not only as a fuel but as a raw material for many industrial materials such as paint, plastic, rubber, lubricants, and so forth.

What is Petroleum? Petroleum is a mixture of naturally occurring hydrocarbons which may exist in the solid, liquid, or gaseous state, depending upon the pressure and temperature to which it is subjected. Virtually all petroleum is produced from the earth in either liquid or gaseous form, and commonly these materials are referred to as either crude oil or natural gas, depend upon the state of hydrocarbon mixture.

Since the vast majority of oil and gas bearing formations are several hundred meters to several thousand meters beneath the earth’s surface, the oil well offers the only tool for accessing the reservoir from the surface.  The well-bore region and the collected core (if any) offer a snapshot of the reservoir properties, in a fashion similar to a line drawn in a three dimensional volume.  In other words, results from core tests do not describe the reservoir accurately but they do help describe the physics.

Up until the late 1980s there was practically no variability in the manner in which a well was drilled.  However, horizontal drilling (a Soviet invention of the 1920s) revolutionized the drilling industry as it allowed for one well to access a formation at several horizontal locations (Figure 1‑2). 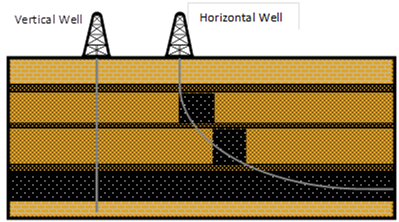 Source beds as organic rich formations are the necessity of petroleum generation. Petroleum migration occurs after formation from source beds toward the reservoir or storage beds. Reservoir rocks have void spaces and are permeable to fluids, in other words they have interconnected void spaces.

Reservoir rocks are categorized as either sandstone or carbonate.  Sandstones are formed from grains that have undergone sedimentation, compaction and cementation.  The major characteristics of sandstone reservoirs are as follows:

Carbonates are formed from the remnants of hard-shelled organisms that existed in coral reef environments.  The major characteristics of carbonates are:

About 60% of the conventional oil reservoir rocks are sandstones and about 39% of them are carbonates.

External forces such as buoyancy which force the petroleum to migrate from source rock to reservoir rock could push oil to reach the surface. So presence of a barrier over the reservoir formation is vital in accumulation of oil in the reservoir rocks. This barrier is known as “trap” in petroleum engineering. Traps associated with oil fields are complex. Different reservoir according to type of their trap can be classified as follows (Figure 1‑3):