Solutions to the One-Dimensional Convection-Dispersion Model

The following assumptions are implicit in eq. (5‑68):

Eq. (5‑68) is a second order partial differential equation, requiring two boundary and an initial condition for its solution.

When the space variable x is translated such that the transformed distance x’ becomes the distance from the flood front rather than the distance from the inlet of the porous medium, eq. (5‑68) reduces to the one-dimensional unsteady diffusion or heat conduction equation, also known as Fick’s second law (Taylor, 1953; Nunge and Gill, 1970):

vt = distance of the flood front from the porous medium entrance.

This equation has been solved analytically for a variety of initial and boundary conditions (see, for example, Carslaw and Jaeger, 1959; Özişik, 1980).

Some properties of the error function are 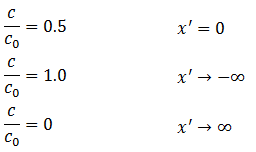 Typical concentration profiles, obtained from Equation 23, are shown in Figure 6. The curves are symmetrical about the point ( z’ = 0, c / c0 = 1/2). The profiles become more dispersed when D increases or as time progresses.

Initial and boundary conditions can similarly be put into non-dimensional form. 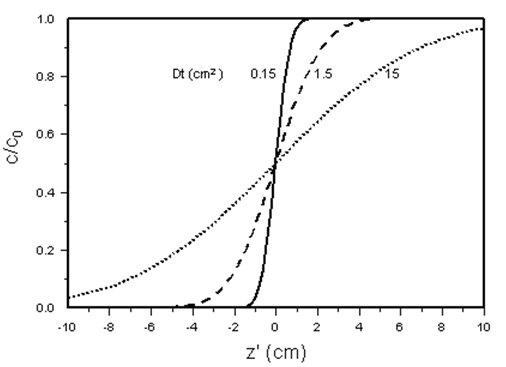 Figure 5-58: Concentration as a Function of Transformed Distance for Different Values of Dispersion Coefficient or Time, Calculated from eq. (5-72), Infinite System

<< EQUATION OF DISPERSION IN POROUS MEDIA

DETERMINATION OF THE DISPERSION COEFFICIENT >>