Determination of the Dispersion Coefficient

Determination of the Dispersion Coefficient

Because of its simplicity, eq. (5‑71), although representing infinite systems, is often used to approximate concentration distributions in finite systems. In a typical laboratory core flood experiment, a porous medium is fully saturated with a fluid. A miscible fluid or tracer, such as a salt solution or dye or radioactive material, is then injected at a known, constant flow rate. Effluent samples are collected at the core exit and analyzed for tracer concentration. In such an experiment, eq. (5‑71) represents the effluent concentration, i.e., the concentration at a fixed distance ( z = L, or z’ = L – vt ).

In an experiment such as this one, the dispersion coefficient can be determined using a simple procedure described by Brigham et al. (1961). When eq. (5‑71) is used to calculate effluent concentrations from a finite porous medium ( z = L or z’ = L – vt ), it is convenient to transform variables such that time is replaced by throughput in pore volumes (Brigham et al., 1961; Brigham, 1974). Change variables such that:

When λ is plotted against the percentage of displacing fluid in the effluent on arithmetic probability coordinates (Figure 5‑59), and provided the convection-dispersion model holds, a straight line results from which the longitudinal dispersion coefficient can be obtained using the following equation (Brigham et al., 1961; Perkins and Johnston, 1963): 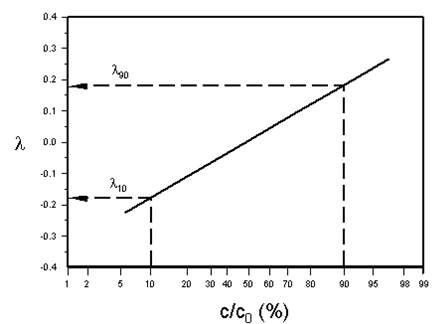 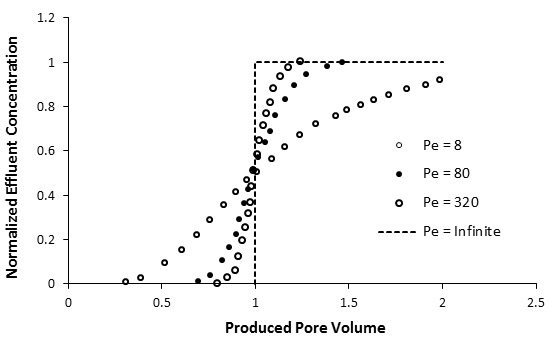 Figure 5‑60 shows effluent concentrations plotted as a function of pore volumes injected (eq. (5‑78)). As in Figure 5‑58, the mixing zone becomes wider as the dispersion coefficient increases, or as Pe decreases. According to eq. (5‑78), c / c0 = 1/2 at one pore volume injected. When D → 0 (Pe → ∞), plug flow is obtained and the effluent profile is a step function. When D → ∞ (Pe → 0), the porous medium becomes a continuous stirred tank, and the dispersion model no longer holds.

It is of interest to note that the curves in Figure 5‑58, which represent concentrations at a fixed value of time plotted as a function of distance, are always symmetrical. By contrast, the concentrations in Figure 5‑60, which are concentrations at a fixed distance ( z = L ) plotted as a function of time or throughput, are not symmetrical, particularly at low Peclet numbers. This may seem surprising, since both sets of curves are derived from solutions to the same equation. The reason for the difference in symmetry is evident from eqs. (5‑71) and (5‑78). At a fixed value of time, concentrations calculated from equation 23 are always symmetrical about the flood front ( z = vt or z’ = 0 ). Concentrations calculated as a function of time or pore volumes injected at z=L from eq. (5‑78) are not symmetrical about a throughput of one pore volume because of the term ( √(V / Vp) ) that appears in the denominator of the error function argument. The asymmetry becomes more pronounced at low Peclet numbers. Brigham (1974) has previously noted this, and has discussed the implications in detail.

<< SOLUTIONS TO THE ONE-DIMENSIONAL CONVECTION-DISPERSION MODEL