Overall Diffusion Coefficient (Mutual Diffusivity): It is denoted by DAB, and it refers to the diffusion of one constituent in a binary system (A and B). For liquids, it is common to refer to the limit of infinite dilution of A in B using the symbol, D°AB. Assume a bitumen-solvent vertical system where solvent is on the top of the bitumen. The diffusion rate of solvent through a unit area is described by eq. (3‑2) as follows:

As solvent diffuses into the bitumen, a diffusion flux occurs for oil molecules toward the solvent:

According to the volume conservation in the system, the diffusion flux of bitumen should be equal to the solvent flux, but in opposite direction:

The overall diffusion coefficient Dbs is a material property that describes the mobility of either component in the mixture.

Self Diffusion Coefficient: It is denoted by DA’A and is the measure of mobility of a species in itself. Also when we have a binary system where A and B are the less mobile and more mobile components respectively, their self-diffusion coefficients can be used as rough lower and upper bounds of the mutual diffusion coefficient in some systems. That is, DA’A < DAB < DB’B.

Intrinsic Diffusion Coefficient: When there is a considerable difference between the molecule size of solvent and oil, for example in the previous system of solvent-bitumen, during diffusion of solvent into bitumen (in the previous system), the small solvent molecules tend to diffuse faster than the large molecules of bitumen. The intrusion of solvent molecules into bitumen causes a buildup of pressure in bitumen part. This pressure gradient causes a bulk flow of bitumen solution toward the solvent-rich part. In this situation the net flow of solvent is the sum of the diffusional flux of solvent

and the flux of solvent displaced by bulk flow ( uXs ), which ‘u’ is measured in the direction of ‘y’. According the volume balance solvent, net flow should be equal to the bitumen net flow with diffusion and bulk flow:

When there is not much difference between the molecule sizes of solvent and oil the net flow velocity is almost zero, because of the equality between intrinsic diffusion coefficient of oil and solvent. Although for solvent-bitumen system which intrinsic diffusion coefficient of solvent is higher than bitumen, because of smaller molecular size, bulk flow will be most significant. Eq. (3-19) describe the volume conservation of solvent in a solvent-bitumen system:

Substituting eq. (3‑18), for ‘u’, into the eq. (3‑20) will be ended with the following relation between the overall and intrinsic diffusion coefficient: 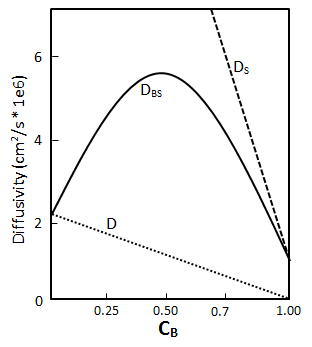 In some cases the diffusion coefficient can be reasonably taken as constant (e.g. dilute solutions) while, in some others it depends very markedly on concentration.

DIFFUSION COEFFICIENT AS A FUNCTION OF CONCENTRATION >>