Effects of Temperature on Relative Permeability 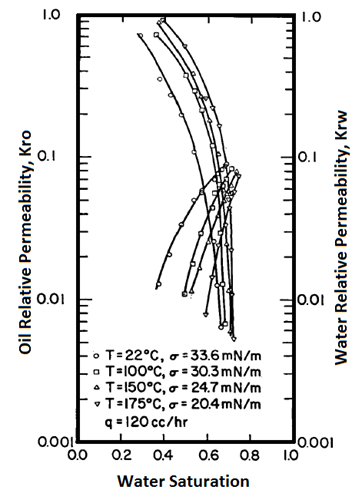 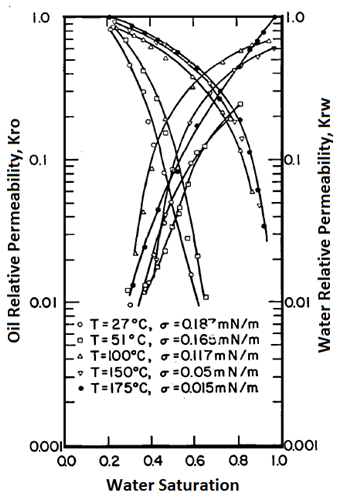 For the low tension system, the changes in Swir with temperature are not significant, but Swir values for low tensions were lower than those at high tensions.  This implies that the increase in temperature and decrease in IFT have opposite effects on Swir; increasing temperature increases Swir but as IFT is decreases, Swir decreased.  Therefore it is possible that Swir in the low-tension system at high temperatures is controlled by both the IFT and wettability changes due to temperature.

Sufi et al. found that in the temperature range of 20°C to 85°C, the relative permeability of oil and water obtained from unconsolidated clean Ottawa sand does not change[22].  In a separate experiment, they saw that as temperature increases, Sor decreases.  This observation is consistent with Handy et al.  Sufi et al. also said that as temperature increases, the viscosity ratio of the oil water system decreases.  This reduction in the viscosity ratio is responsible for the change of the fractional flow curve as seen in the second experiment. Thus a change in Sor is not necessarily due to a change in wettability.

They also found that the irreducible water saturation increases as the temperature of the system increases.  This observation is similar to that of Handy et al.  The changes in irreducible water saturation can be illustrated to depend only on the change in the viscous force, irrespective of whether it is caused by a temperature or a rate change.  Figure 10 demonstrates this: 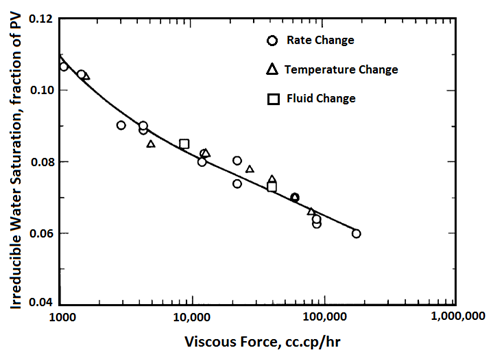 From this figure, it can be seen that the change in Swi due to temperature or flow rate follows the same pattern.  This indicates that changes in irreducible water saturation with temperature can be caused by changes in viscous forces not necessarily changes in wettability.

Nakornthap et al. believed that the adsorbed layer of polar components in crude oil on rock surfaces is thermodynamically unstable, thus it can be desorbed at high temperature and the rock may become more water wet[23].

<< EFFECTS OF LOW IFT OR NCA ON RELATIVE PERMEABILITY