These boundary conditions have been discussed quite widely, for example by Danckwerts (1953), Kramers and Alberda (1953), Aris and Amundson (1957), Bischoff and Levenspiel (1962), Coats and Smith (1964), and Brigham (1974). Inlet condition 5‑83) states that the solute concentration at the entrance to the porous medium is determined by bulk flow and diffusion. Outlet condition 5‑86) is somewhat intuitive, and is necessary to prevent the solute concentration in a porous medium of finite length from passing through a maximum or minimum (Danckwerts, 1953). Conditions 5‑83) and 5‑86) are often referred to as “Danckwerts’ boundary conditions.” Outlet condition 5‑87) has been used by Batycky et al. (1982), who argue that it is less restrictive than the Danckwerts condition 5‑86), and is computationally more convenient to use than the semi-infinite bed condition.

Many solutions to the convection-dispersion equation for systems other than infinite contain the error function in addition to other terms, and c / co is therefore different from 0.5 at V / Vp = 1. Different concentration profiles are obtained when different boundary conditions are used to solve eq. (5‑61), particularly when the mixing zone is large compared to the length of the porous medium, i.e., when Pe is small (Brigham, 1974). An example of effluent profiles with boundary conditions 5‑83) and 5‑86), and zero initial concentration, is shown in Figure 5‑61 (Brenner, 1962). In the absence of dispersion ( Pe → ∞, D = 0 ), the effluent concentrations are a step function. As dispersion increases (Pe decreases), the effluent concentrations take the symmetrical S-shape often observed in experimental data. c / c0 is greater than ½ at one pore volume injected at small Pe, but approaches ½ with increasing Pe. When Pe = 0 (D → ∞), the porous medium becomes a continuous stirred tank. The convection-dispersion model no longer applies, and the effluent concentrations become an exponential function of the volume injected. 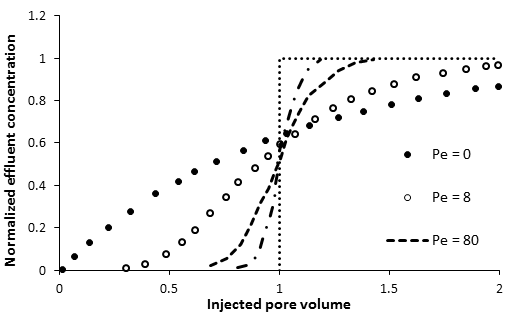 The solution to eq. (5‑71) is thus sensitive to the boundary conditions. Examples of effluent curves for an infinite system with a step change in input concentration (boundary conditions (5‑70)) and for a finite system with boundary conditions 5‑83) and 5‑86) are shown in Figure 5‑62. At a Peclet number of 24, differences in effluent concentrations from the two systems become quite small. A detailed comparison of solutions to the convection-dispersion model, obtained with different boundary conditions, is provided by Gershon and Nir (1969) and van Genuchten and Alves (1982). The latter authors suggest that differences between solutions become small compared to experimental errors when the Peclet number exceeds 30. 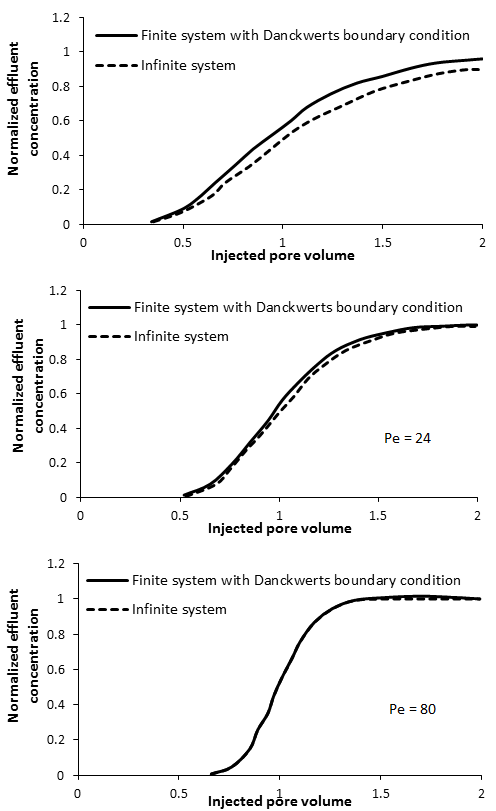 Figure 5-62: Effect of Boundary Conditions on Solutions to the Convection-Dispersion Equation at Different Peclet Numbers

The proper choice of inlet boundary condition in a semi-infinite system with outlet condition 5‑84), with ca = 0, has been discussed by Brigham (1974), and later by Parker and van Genuchten (1984) and Toride et al. (1993), who argue that one must distinguish between “flowing” and “in-situ” concentrations, related through the following equation:

<< DETERMINATION OF THE DISPERSION COEFFICIENT