Where, c is constant.

In fact, The Leverett J-function is an attempt at extrapolating capillary pressure data for a given rock to rocks that are similar but with differing permeability, porosity and wetting properties.  It assumes that the porous rock can be modelled as a bundle of non-connecting capillary tubes, where the factor √( k / ∅ ) is a characteristic length of the capillaries’ radii and Leverett interpreted √( k / ∅ ) as being proportional to the square of a mean pore radius.

For the same formation, however, this dimensionless capillary-pressure function serves quite well in many cases to remove discrepancies in the Pc versus Sw curves and reduce them to a common curve. 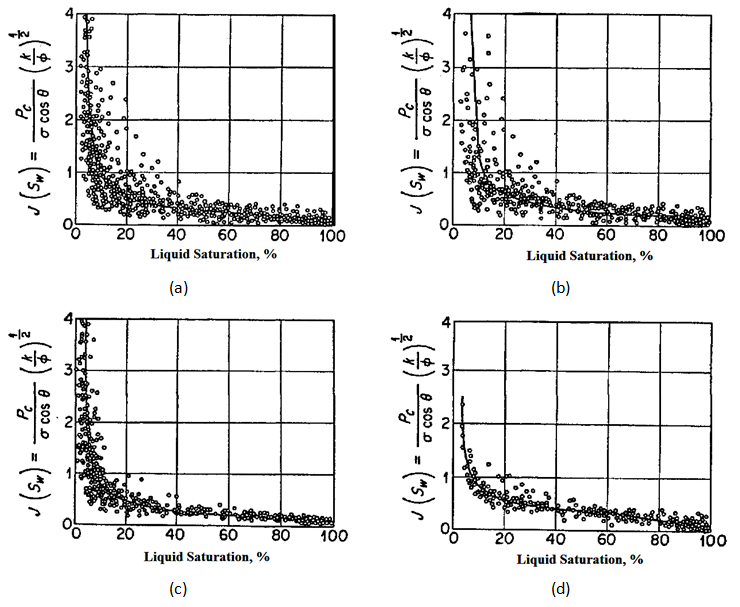 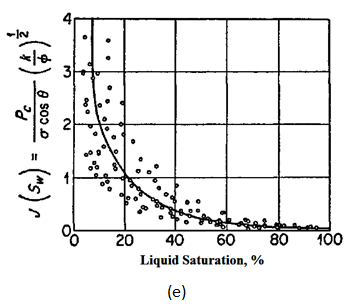 (b). J curve for Limestone cores

A laboratory capillary pressure test was conducted on a core sample taken from the Nameless Field. The core has a porosity and permeability of 16% and 80 md, respectively. The capillary pressure-saturation data are given as follows:

The interfacial tension is measured at 50 dynes/cm. Further reservoir engineering analysis indicated that the reservoir is better described at a porosity value of 19% and an absolute permeability of 120 md. Generate the capillary pressure data for the reservoir.

At the next step, Using the new porosity and permeability values, solve eq. (2‑116) for the capillary pressure Pc.