Under natural conditions, a porous medium volume at some depth in a ground water aquifer or in an oil reservoir is subjected to an internal stress or hydrostatic pressure of the fluid saturation the medium, which is a hydrostatic pressure that has the same values at different direction, and to an external stress exerted by the formation in which the particular volume is surrounded and may have different value at different directions. The external stress of the formation can lead to the compaction of the porous medium that is a function of the formation depth. Krumbein and Sluss (1951) showed that porosity of the sedimentary rocks is a function of the degree of compaction of the rock (Figure 2‑17). 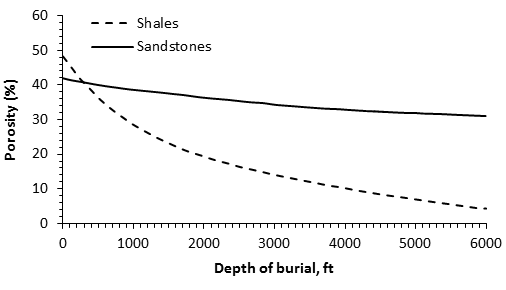 Figure 2-17: Porosity Reduction as an Effect of Compaction Increment by Depth

Compaction effect on the porosity that leads to porosity reduction is principally due to the packing rearrangement after compaction. The porosity of shales is greatly reduced by compaction largely because “bridging’ is eliminated by the greater forces. Addition to the effect of compaction on the grain arrangement, rocks also are compressible. Three kinds of compressibility must be distinguished in rocks:

The value of CS (in some literature mentioned as Cr as rock compressibility) can be determined by saturating the rock with a fluid, immersing the rock in a pressure vessel containing the saturating fluid, then imposing a hydrostatic pressure on the fluid and observing the change in the volume Vs (or Vsr) of the rock sample. The compressibility of solid matrix (CS or C) is considered for most rock to be independent of the imposed pressure.

But reservoir rocks are under other conditioning of loading than this experiment. A rock buried at depth is subjected to an overburden load due to the overlying sediments which is in general greater than the internal hydrostatic pressure of the formation fluids. (Figure 2‑18.a) shows an experimental apparatus that simulate this condition for a sample rock. A core sample is enclosed in a copper jacket which is then immersed in a pressure vessel and connected to a Jurguson sight glass gauge. The hydraulic pressure system is arranged so that a saturated core can be subjected to variable internal (or pore) pressure and external (or overburden) pressure. The resulting internal volume change is indicated by the position of the mercury slug level in the sight glass. Typical curve are obtained shown if (Figure 2‑18.b). The ordinate is the reduction in pore space resulting from a change in overburden pressure. The slope of the curve is the compressibility of the form:

The value of CB can be determined by measuring the change in the bulk volume of a jacketed sample by varying the external hydrostatic pressure while maintaining a constant internal pressure. For sandstones and shale it can be shown that: 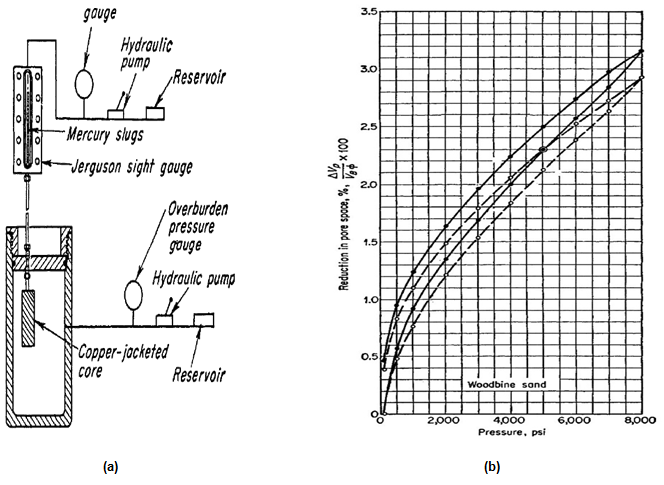 This equation states that total change in volume is equal to the change in the pore volume.

Geertsma (1957) stated that in reservoir only the vertical component of overburden pressure is constant and the stress components in horizontal plane are characterized by boundary condition that there is no bulk deformation in those directions. For these boundary conditions he developed the following approximation for sandstone:

Thus, the effective pore compressibility for reservoir rocks under the depletion of pore pressure is only one-half of that determined by present methods in the laboratory.

In summary it can be stated that the pore volume compressibilities of consolidated sandstones are of the order of 5 x 10-6 to 10 x 10-6 reciprocal psi.