The mean curvature can be expressed as a function of the radius of curvatures:

A general expression of capillary pressure as a function of interfacial tension and curvature of the interface can be generated by substitution of H in eq.(2‑80) into the Young-Laplace eq. (2‑79): 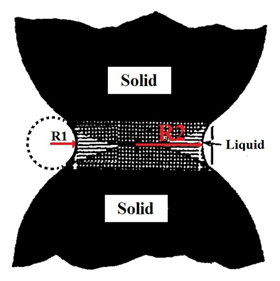 It is impossible to measure the values of R1 and R2 , so they are generally referred to by mean radius of the curvature and empirically determined from other measurements on a porous medium.

For a fluid-fluid interface in a capillary tube:

Where ‘r’ is the radius of the capillary and θ is the contact angle.