After exposing the protons to the net static magnetic field ( B0 ), apply an oscillating magnetic field (B1) perpendicular to B0, therefore, the magnetization M will precess farther and farther away from the z-axis. This process is called ‘Tipping’. According to the quantum mechanics point of view, if a proton is at the low-energy state (its processional axes are parallel to the net magnetic field), it may absorb energy provided by B1 and jump to the high-energy state. The application of B1 also causes the protons to precess in phase with one another. This change in energy state and in-phase precession caused by B1 is called nuclear magnetic resonance. 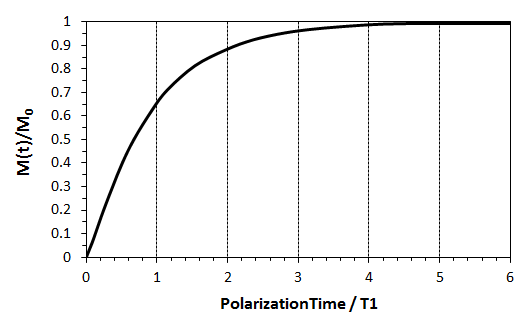 The magnetization vector M can be thought of as having a component MZ along the z-axis (direction of B0), which called longitudinal magnetization, and a component Mxy perpendicular to the field named transverse magnetization. At equilibrium Mxy = 0 and MZ = M. when the protons are exposed to the oscillating magnetic field B1, MZ decreases and Mxy increases. The angle of deflection or rotation of sample’s net magnetization depends primarily on the product of amplitude (energy) of the B1 and the length of time that B1 is applied:

B1 = Amplitude (energy) of the oscillating field,

τ = Time over which the oscillating field (B1) is applied

<< PRINCIPLES OF NMR AND PROCESSING