Leverett et al. were the first to report about the influence of flow rate on relative permeability, however they later attributed this to capillary end effects.  Crowell et al. and Greffen et al. found that injection rate has no affect on the viscous flow of water and gas. Also, Labastie et al. reported that relative permeabilities were independent of flow rate except near residual oil saturation

[25]
.  However, there are many others who reported that relative permeability does change as flow rate changes.

Heaviside et al. believed that for an intermediate wettability medium, at low flow rates the oil segments would exist in the center of pores, and blocks the flow of water.  However, at high pressure gradients or high flow rates water would be forced through the throats with the oil coating the pore surface.  Thus relative permeability can change with flow rate[7].

Heaviside et al. also found that the viscous force does not affect residual oil saturation for strongly water wet chalk.  In the experiment, the pressure gradient is increased but no change in production rate is seen[7]. 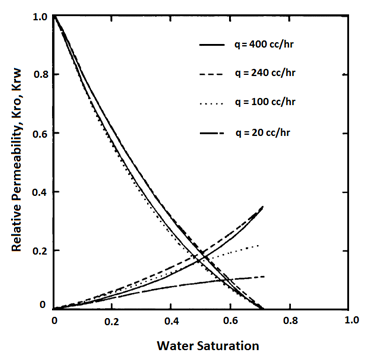 Figure 2-95: Effects of Flow Rate on Relative Permeability (After 22)

This figure shows that the relative permeabilities for oil remain unchanged, while the water relative permeability curves are low at low flow rate, and become independent of rate when the flow is high (greater than 240 cc/hr).  Therefore, it was assumed by Sufi et al. that the rate of 240 cc/hr represents the minimum rate required for front stability.  As mentioned before, Handy said that in their experiment when the flow rate is larger than 120 cc/hr, no effect is seen.  Thus Sufi and Handy disagree about the value of the critical stability flow rate.

Heaviside et al. reported that for strongly wetted systems, at high IFT, there is a negligible rate dependency, even at very high flow rate.  However, in cases of low IFT, rate dependency can be seen[7].

<< EFFECTS OF TEMPERATURE ON RELATIVE PERMEABILITY

EFFECTS OF VISCOSITY ON RELATIVE PERMEABILITY >>