The standard approach in controlling excessive gas or solvent production is work overs in which the current perforations are cement squeezed and new perforations are made lower in the reef. This procedure is costly and is not always successful. Husky proposed another procedure in optimizing the displacement strategy which an improve the vertically directed miscible floods, by applying a cyclic flow interruption consisting of periodical shut-in. Experimental and numerical results showed that the concept of shut-in leads to significant incremental oil recoveries. Indeed during the shut in period solvent and oil have time to settle under gravity effect and there is an extra time for mass transfer between solvent and oil.

The problem with the cyclic flow interruptions is that production is discontinued. The question was raised whether a similar effect could be observed through a continuous process.

It was proposed that cyclic pressure pulsing under restricted flow could increase mass transfer between solvent and oil and also force recovery from dendritic structures or other upswept areas through pressure pulsing of the solvent and gas phases. Kantzas et al. ran a series of vertical miscible flood tests on a core from the Rainbow Keg River area. All runs were performed at rates significantly higher that the critical rate for the specific system. Methane was used as the solvent and n-pentane as the oil. The choice of materials (methane and n-pentane) was made to match density and viscosity rations of the reservoir fluids while maintaining a simple composition of each phase, so that effluent analysis could be simplified. Figure 5‑42 shows their laboratory apparatus. The core was always mounted in the vertical position and saturated with n-pentane. Methane was injected at various rates from the top of the core. Different pressure pulsing scenarios were also applied. Sixteen experiments were discussed in their report. For each experiment at different time steps recovery, cumulative recovery, GOR and mass fraction of each fluid in the effluent using gas chromatograph data and a Peng-Robinson type algorithm.

The base case that is used to evaluate other process is continuous injection of the solvent. Injection rate was approximately ten times of the critical rate. To simulate the shut in process, the same rate was maintained, but every two hours the experiment was shut in for a day. The shut in test lasted for around 75 hours. The incremental recovery compare to the base case (continuous injection) was around 6% OOIP. So shut in can provide significant incremental oil recovery with zero incremental investment. However, since the project is extended for significantly longer periods of time, the return on the initial investment may be perceived as unattractive.

Figure 5-42: Schematic of the Experimental Apparatus

It was found that with respect to rate reductions reducing the rate by half does not increase the recovery of oil. However, rate reduction after breakthrough gave a recovery increase of approximately 3% OOIP. Reducing the rate and applying pressure pulsing at the same time also provides better recoveries than the base case. Up to 4% incremental recovery of OOIP can be obtained.

The plots for the base case compared to a combination of pressure pulsing with rate reduction are shown in Figure 5‑44. In this figure the recovery plot as a function of pore volumes of solvent injected. 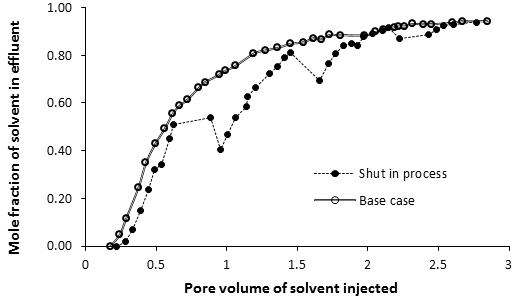 Figure 5-43: Plot of Mole Fraction of Solvent in the Effluent as a Function of the Pore Volumes of Solvent Injected. Periodic Shut-in Case 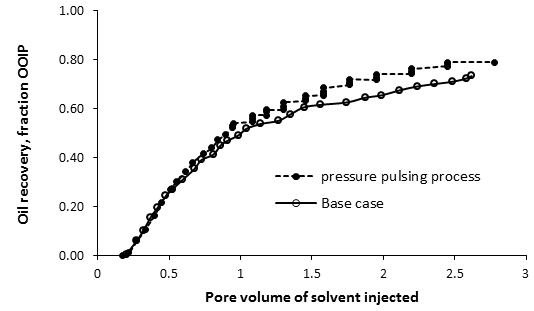 Figure 5-44: Cumulative Recovery for Rate Reduction and Pressure Pulsing as a Function of Pore Volumes of Solvent Injected

According to the Kantzas et al. experimental results it could be concluded that the life of a mature vertical miscible flood can be extended if the miscibility is enhanced. Such an enhancement can be achieved through periodic flow interruptions (shut-in), or rate reduction combined with cyclic pressure pulsing. 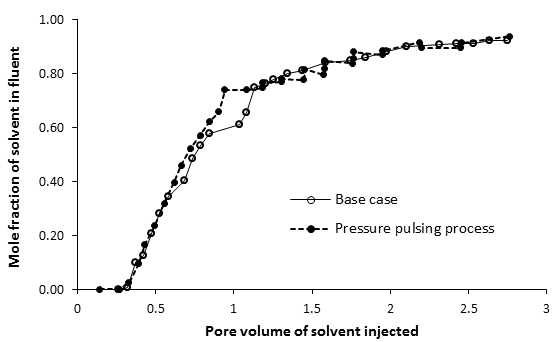 Figure 5-45: Mole Fraction of Solvent in the Effluent as a Function of the Pore Volumes of Solvent Injected. Rate Reduction and Pressure Pulsing Case

MIXING OF FLUID BY DISPERSION >>