[1]
. Figure 3‑19 shows the spectra of pure viscous oil, of pure solvent, and of a mixture of solvent with bitumen that was prepared by mild heating and stirring. As mentioned before the amplitude indices of the bitumen signals (AIb) are lower than the amplitude indices of the signals from the solvent (AIS). It is because of the large molecular size of bitumen that lead to lower amount of hydrogen in unit volume compare to the solvent with smaller molecular size. On the other hand relaxation time for bitumen is much faster than the relaxation time for solvent because of high viscosity of bitumen. It can be seen that the spectrum of the mixture is distinctly different than the spectra of the individual components. This distinction forms the basis of the methodology used to study the diffusion of solvent in heavy oil using NMR. 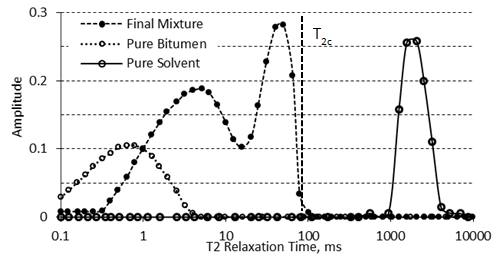 From Figure 3‑19, it is evident that during the diffusion of a solvent in bitumen the solvent spectrum shifts to faster relaxation times by increasing its viscosity during the mixing, while the bitumen spectrum shifts to longer relaxation times by decreasing of its viscosity. Two separate peaks of pure heavy oil/bitumen and solvent become one continuous multi-peak spectrum.

Prior to starting the experiment, mixtures of known percentages of bitumen and solvent are prepared and the correlation between the NMR parameters and the concentration of bitumen in the mixture is determined (NMR parameters calibration with bitumen content). These correlations were used to calculate the concentration of the solvent that diffused in the heavy oil or bitumen during the test (Figure 3‑20).

The mass of diffused solvent could be calculated as:

The total amplitude of diffused solvent is calculated using the following relation:

As the next step, geometric mean relaxation time for the diluted bitumen, T2gm, is calculated according to eq. (3‑34). The solvent content (concentration) could be calculated form the generated correlation between NMR properties and bitumen content (such as Figure 3‑20) at different times.

The concentration of solvent determined through NMR spectra change is the overall concentration, C, in the mixture area, which is a function of time and diffusion coefficient. The correlation between concentration C, time t, and D is described in the following equations:

t = the time of measurement,

x = the equilibrium distance for the early times (for example first two days) of measurements,

D = the diffusion coefficient that gives the best fit.

Since there is no ability to obtain the correlation between concentrations with distance from NMR spectra, an overall constant diffusion coefficient is considered from the analysis of NMR data.

x is determined independently using X-Ray CAT scanning. The reason for using early time data is because the interface between solvent and heavy oil/bitumen can only be maintained stable for a short time. That was the observation made from CAT scanning experiments[3]. Figure 3‑21 shows a sample result of diffusion coefficient calculated using NMR experiment.

Afsahi and Kantzas (2007) used the same method to find the diffusion coefficient in sand-saturated sample. They mixed the bitumen with sand thoroughly in a way that the final mixture of sand and bitumen had almost 35 to 40% porosity (40% bitumen, 60% sand). Then the bitumen-sand mixture was placed in the vial and compacted completely. Solvent was placed on top of oil-saturated sand in the vial.

In order to keep the sand in place after dilution of heavy oil by the solvent they used a nylon mesh to separate the oil-saturated sand from the solvent. NMR measurements were taken frequently and changes in the spectra were related to the change of oil and solvent properties as solvent diffused into the oil-sand matrix. Another step of the procedure was the same as for the bulk diffusion that explained earlier.

Another interesting usage of NMR method, such as pore size distribution or wettability determination, will be illustrated later.