[1]
,[2]. The Buckley-Leverett theory [1942] estimates the rate at which an injected water bank moves through a porous medium. The approach uses fractional flow theory and is based on the following assumptions:

Frontal advance theory is an application of the law of conservation of mass. Flow through a small volume element () with length ∆x and cross-sectional area “A” can be expressed in terms of total flow rate qt as:

Where q denotes volumetric flow rate at reservoir conditions and the sub-scripts {o,w,t} refer to oil, water, and total rate, respectively and ƒw and ƒo are fractional flow to water and oil (or water cut and oil cut) respectively:

The constants “a” and “b” may be determined from the graph, such as Figure 4‑1, or determined from simultaneous equations from known data of saturation and relative permeability. 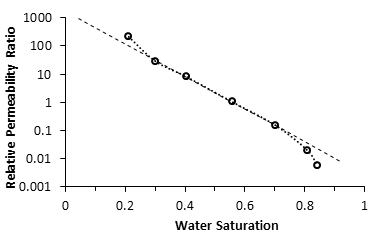 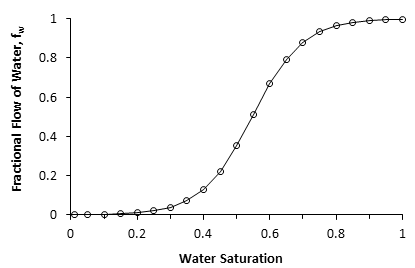 Assume that the total flow rate is the same at all the medium cross section. Neglect capillary and gravitational forces that may be acting. Let the oil be displaced by water from left to right.

The rate the water enters to the medium element from left hand side (LHS) is:

The rate of water leaving element from the right hand side (RHS) is:

The change in water flow rate across the element is found by performing a mass balance. The movement of mass for an immiscible, incompressible system gives:

This is equal to the change in element water content per unit time.

The subscript x on the derivative indicates that this derivative is different for each element. 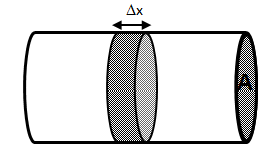 is the slope of the fractional flow curve and derivative

is the velocity of the moving plane with water saturation Sw. Because the porosity, area, and flowrate are constant and because for any value of Sw, the derivative

is a constant, then the rate dx / dt is constant.

This means that the distance a plane of constant saturation, Sw, advances is proportional to time and to the value of the derivative (

) at that saturation, or:

xSwis the distance traveled by a particular Sw contour

Qinj is the cumulative water injection at reservoir conditions.

Assume a cubical reservoir under active water drive with oil production of 900bbl/day. The flow could be approximated as a linear flow. The cross sectional area is the product of the width, 1320 ft, and the true formation thickness, 20 ft, so that for a porosity of 0.25, eq. (4‑19) becomes:

Consider that because we assume the fluids are completely incompressible, so the oil production rate is equal to the total flowrate in the different cross sections of the reservoir.

If we let x=0 at the first point of the transition zone, then the distances the various constant water saturation planes will travel in, say, 60, 120, and 240 days are given by:

The value of the derivative

plotted against water saturation from eq. (4‑21). Since Eq. (4‑7) does not hold for the very high and for the quite low water saturation ranges (see Figure 4‑1), some error is introduced below 30% and above 80% water saturation. Since these are in the regions of the lower values of the derivatives, the overall effect on the calculation is small. 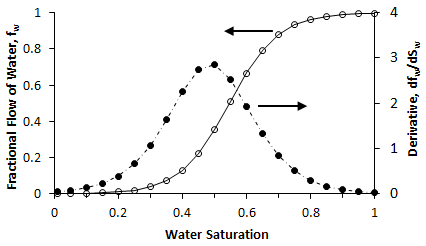 This distance is plotted as shown in Figure 4‑6 along with the other distances that have been calculated using eqs (4‑20) and (4‑21) for other time values and other water saturations. These curves are characteristically double-valued or triple valued. For example, Figure 4‑6 indicates that the water saturation after 240 days at 400 ft is 20, 39, and 69%. The saturation can be only one value at any place and time. What actually occurs is that the intermediate values of the water saturation have the maximum velocity (Figure 4‑5 and eq. (4‑17)), will initially tend to overtake the lower saturations resulting in the formation of a saturation discontinuity or shock front. Because of this discontinuity the mathematical approach of Buckley-Leverett, which assumes that Sw is continuous and differentiable, will be inappropriate to describe the situation at the front itself.

The difficulty is resolved by dropping perpendiculars at point Xƒ (as flood front position) so that the areas to the right (A) equal the areas to the left (B), as shown in Figure 4‑6. In other words a discontinuity in Sw at a flood front location Xƒ is needed to make the water saturation distribution single valued and to provide a material balance for displacing fluid. 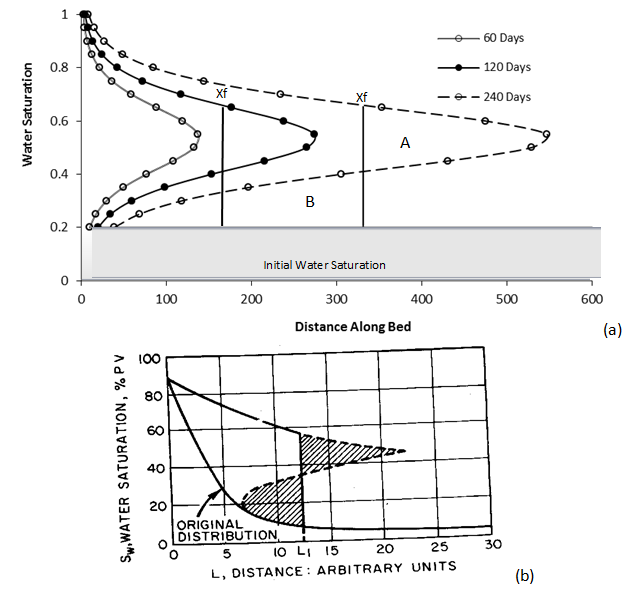 A more elegant method of achieving the same result was presented by Welge in 1952. This consists of integrating the saturation distribution over the distance from the injection point to the front, thus obtaining the average water saturation behind the front Sw, as shown in Figure 4‑7[3].

Figure 4-7: Water Saturation Distribution as a Function of Distance, Prior to Breakthrough

The situation depicted is at a fixed time, before water breakthrough, corresponding to an amount of water injection. At this time the maximum water saturation, Sw = 1 – Sor, has moved a distance X1, its velocity being proportional to the slope of the fractional flow curve evaluated for the maximum saturation which, as shown in Figure 4‑5, is small but finite. The flood front saturation Swƒ is located at position x2 measured from the injection point. Applying the simple material balance:

Where, Qinj is cumulative water injection.

Where PVI is the pore volume injected. So:

The average water saturation in the reservoir at the time of breakthrough is given by material balance as:

i.e. the slope of the fractional flow curve at conditions of the front is given by eq. 4‑29). 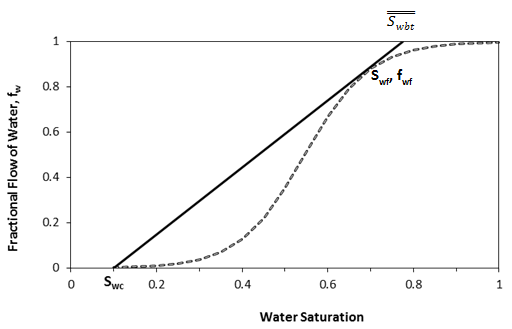 Figure 4-8: Tangent to the Fractional Flow Curve from Sw = Swc

The use of either of these equations ignores the effect of the capillary pressure gradient, ∂Pc / ∂x.

This simple graphical technique of Welge has much wider application in the field of oil recovery calculations.

As eq. (4‑19) shows the velocity of every saturation front is constant, the graph of saturation location vs. time is set of straight lines starting from the origin. This graph is often plotted in dimensionless form. The equation can be made dimensionless by defining:

Figure 4‑9 is a graph of dimensionless distance vs. dimensionless time for the movement of water saturation predicted by the frontal advance equation. Saturation Siw < Sw < Swƒ travel at the same velocity are located on the flood-front path. The region ahead of flood front has a uniform saturation. Saturations greater than Swƒ travel at progressively slower velocities as indicated by the decreasing slopes in Figure 4‑9. 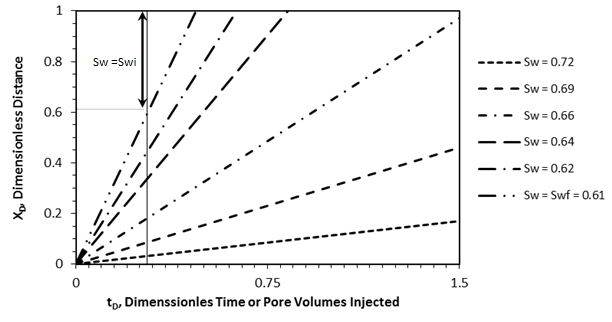 Figure 4-9: xo vs. tD for a Linear Waterflooding 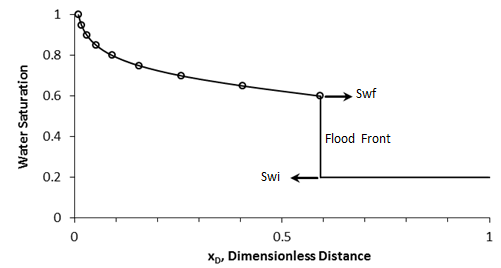 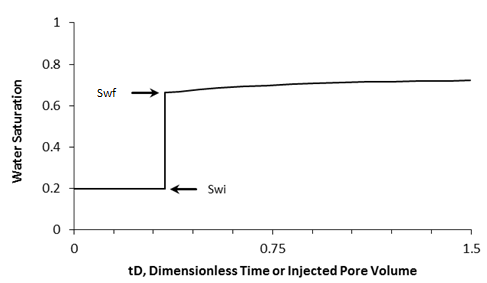 Figure 4-11: Saturation History at xD = 1, Producing Face of the Medium

Figure 4‑12 represents the initial water and oil distributions in the reservoir unit and also the saturation distributions after 240 days, provided the flood front has not reached the produced face of the cubic reservoir. The area to the right of the flood front in Figure 4‑12 is commonly called the oil bank and the area to the left is sometimes called the flooded or drag zone. The area above the 240-day curve and below the 90% water saturation curve represents oil that may yet be recovered, or dragged out of the high-water saturation portion of the reservoir by flowing large volumes of water through it. The area above the 90% water saturation represents unrecoverable oil since the critical oil saturation is 10%. This presentation of the displacement mechanism has assumed that capillary force is negligible.

Figure 4‑12 also indicates that a well in this reservoir will produce water-free oil until the flood front approaches the well. Thereafter, in a relatively short period, the water cut will rise sharply and be followed by a relatively long period of production at high, and increasingly higher, water cuts. For example, just behind the flood front at 240 days, the water saturation rises from 20% to about 60%-that is, the water cut rises from zero to 66% (see Figure 4‑5). When a producing formation consists of two or more rather definite strata, or stringers, of different permeabilities, the rates of advance in the separate strata will be proportional to their permeabilities, and the overall effect will be a combination of several separate displacements, such as described for a single homogeneous stratum. 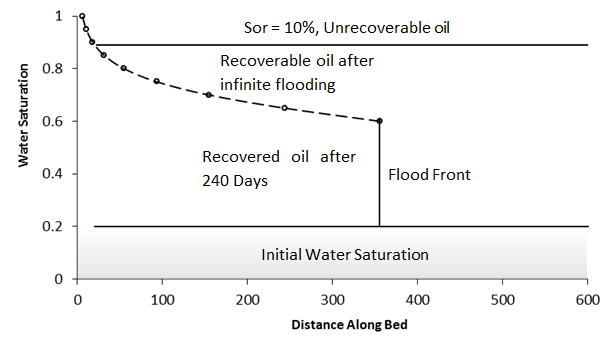