There exists a surface tension between a fluid and a solid, in the same way that a surface tension exists between two immiscible fluids. Wettability is defined as the tendency of one fluid to spread on or adhere to a solid surface in the presence of other immiscible fluids. This spreading tendency can be expressed more conveniently by measuring the angle of contact at the liquid-solid surface. This angle, which is always measured through the liquid to the solid, is called the contact angle θc that is known also as wetting angle. The contact angle cos θc has achieved significance as a measure of wettability. As shown in Figure 2‑36, as the contact angle decreases, the wetting characteristics of the liquid increase. Complete wettability would be evidenced by a zero contact angle, and complete non-wetting would be evidenced by a contact angle of 180°. There have been various definitions of intermediate wettability but, in much of the published literature, contact angles of 60° to 90° will tend to repel the liquid. When one fluid preferentially covers the surface, it is called the wetting fluid, and the other fluid is called the non-wetting fluid. The origin of these surface tensions arises in the different strengths of molecular level interactions taking place between the pairs of fluids. For example a quartz sandstone grain generally develops greater molecular forces between itself and water than between itself and oils. Clean sandstones are therefore commonly water wet. 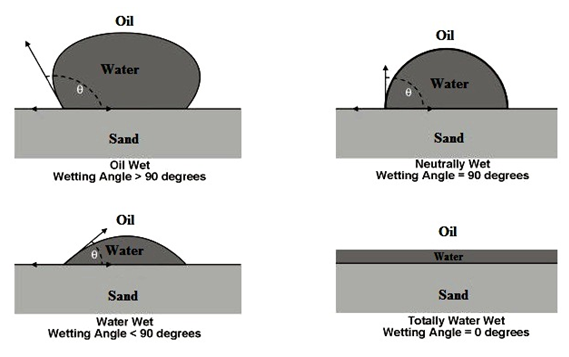 This equation is known as Young’s equation (1805). 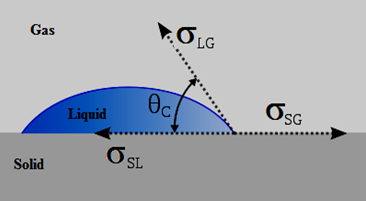 Figure 2-37: Equilibrium of Forces at a Liquid-Gas-Solid Interface

The problems with using the Young’s equation approach include:

To account for surface roughness it was suggested by (Wenzel, 1936):

Table 2 shows some contact angles and surface tensions for common fluids in the hydrocarbon industry.