Once the 90° B1 pulse is turned off, the proton begin to de-phase or lose phase coherency in B0 (Figure 3‑14). As the net magnetization in the transverse plane decreases, a receiver coil that measures the magnetization in the transverse direction could detect a decay signal in this situation. If the magnetic field was really homogeneous (the amplitude is not a function of x, y or z), the signal would decay with a time constant T2. However, since the B0 has some inhomogeneity, the signal actually decays faster with the time constant T2*, which called Free Induction Decay (FID). The FID is very short, which is lasting a few milliseconds. Consequently in the small time interval between the two pulses, very little T1, some T2 de-phasing and substantial T2* occurs. The de-phasing resulting from T2* occurs at a constant rate since it arises from the spatial inhomogeneity of the magnetic field. T2 de-phasing on the other hand fluctuates randomly since it results from the interaction among the nuclei themselves. This type of de-phasing provides valuable sample information.

In order to measure T2, the signals must be recombined. It can be done by applying an 180° pulse after the 90° pulse (after τ ms) to re-phase the proton magnetization vectors in the transverse plan (Figure 3‑15). In effect, the phase order of the transverse magnetization vectors is reversed, so that the slower vectors are ahead of the faster vectors. The faster vectors overtake the slower vectors, rephrasing occurs, and a signal is generated that is detectable in the receiver coil. This signal is called spin echo. The echo time (TE) defined as the time between the 90° pulse and the re-phasing completion, which is 2τ. 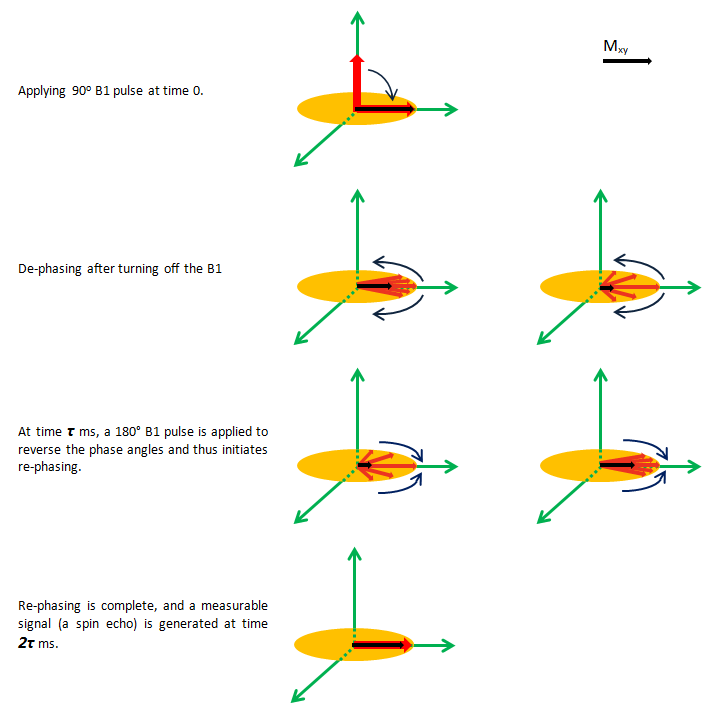 Only a single echo decay very quickly. One way for determining T2 from spin echo amplitudes is by repeating the spin echo method several times with very time τ.

In CPMG method a series of 180° pulse are applied at intervals τ, 3τ, 5τ, 7τ, etc., following the 90o pulse. Echoes are then observed to form at times 2τ, 4τ, 6τ, 8τ, etc. because the de-phasing resulting from molecular interactions the protons can no longer be completely refocused, and the CPMG spin-echo train will decay. On multiple repetitions of the 180° pulse, the height of the multiple echoes decreases successively as a consequence of T2 de-phasing (Figure 3‑16). 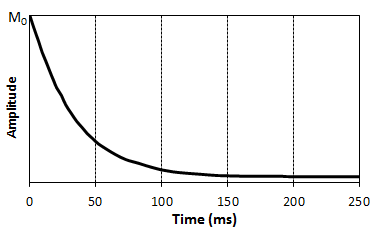