Steady-State techniques of estimating relative permeability are often considered the most reliable source of relative permeability data. Since steady state is achieved in these tests, it is possible to use Darcy’s law to determine the effective permeability for each phase at a given saturation. In the experimental procedure, two phases are injected simultaneously into the test core at constant rates and pressures. Once the measured pressure drop across the core remains relatively constant, the system is assumed to be at steady state. At this point the outlet flow rate of each phase and the pressure drop is measured, and the subsequent values are used in Darcy’s Law (eq. (2-118, 2-119, 2-120)) to calculate the effective permeability of the fluid at that saturation. The inlet flow rate ratio is then changed, and the process repeats itself. In this way, relative permeability curves for each phase can be obtained. The number of data points can be controlled simply through the number of steady-state levels reached. Once again, it must be noted that the saturation changes must be all in one direction to avoid hysteresis effects. The following is a simple schematic diagram of a typical steady-state test apparatus: 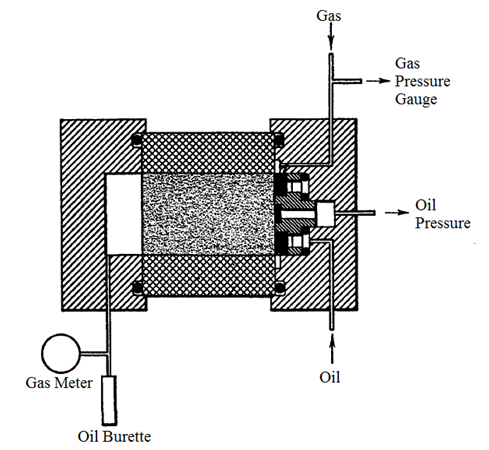 The situation in Figure 2-76 is a 2-phase relative permeability test with gas and oil being the fluids of interest. Both the gas and oil enters the core simultaneously. A gas meter and oil burette on the other end record the outlet flow rates. The gas pressure gauge is used to measure the pressure drop across the core. Following is a simplified diagram indicating the fluid saturation during a typical steady-state test. 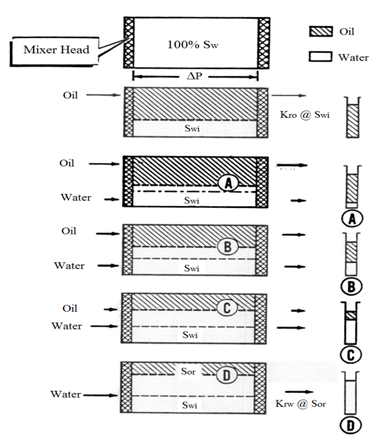 In this situation, the test is imbibition displacement for a water-oil case, with water being the wetting phase. Initially, the core is completely saturated with water. The test begins by injecting just oil until steady state is reached. At this point the water is at irreducible saturation and theoretically only oil should be flowing through the core. However, there is evidence that an extremely small amount of water is still mobile in the system. At this point the flow rate of oil and the pressure drop is measured and these values are used in Darcy’s law to calculate the effective permeability to oil at the irreducible water saturation.  Next, water is injected into the core simultaneously with oil at point A. A new steady state level is reached and the outlet flow rates for each phase are measured along with the pressure drop, and effective permeabilities of each fluid at the given saturation are calculated. The inlet flow rate ratio is changed (increasing the amount of water) and the process is again repeated. In this stepwise manner relative permeability curves can be developed for as many points as desired. To obtain the last end point value for effective water saturation, only water is flowed through the core until irreducible oil saturation is reached at point D.

The main problem associated with steady state tests, is that it can take an extremely long time for steady state to be reached at a given saturation level. It may take hours or even days for a single saturation level to be tested. As such, these tests can be uneconomical to run. However, they are definitely the most accurate and reliable technique for estimating core permeability.  There are numerous steady-state methods available. Examples of these include the Penn State, Modified Penn-State and Hassler methods. The only significant difference between them is in how they account for negating capillary end effects.  Capillary end effects are discussed later.