[1]
used this method to monitor the concentration profiles at a bitumen-solvent interface. Solution of the solvent in the oil dilutes the oil and change the linear attenuation coefficient. This is the basic idea of using the CAT scanning for diffusion process study. For a diffusion study, as the first step heavy oil is adjacent to the solvent in a fixed volume cell (Figure 3‑24). Because of higher oil gravity, solvent is on the top of the heavy oil in the cell. A fixed vertical-sectional position of the diffusion cell is scanned at fixed frequency during the diffusion process. Figure 3‑24 illustrates the typical CT scan image of solvent diffusing into the heavy oil. 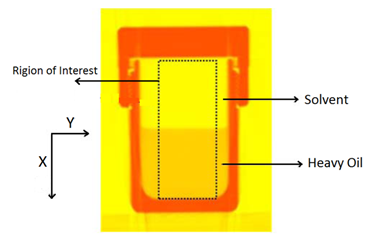 The changes in the CT numbers are related to the changes of oil densities as a solvent diffuses into the heavy oil, and CT number has a linear relationship with density. Thus, the CT number profiles can be converted to the density profiles. In addition, the mixture (solvent and heavy oil) density has a linear relation with the solvent content in the mixture. Therefore, using the following equation (eq. ((3‑47)), normalized concentration profiles could be obtained from the densities.

ρo = Density of the solvent close to the interface (kg/m3)

By assumption of linear relationship between concentration and diffusion coefficient[2] the Fick’s second law equation (eq. (3‑22)) could be converted to the following equation:

Using CAT scanning we have density at each point for any measurement time. This was the base idea for Guerrero-Aconcha and Kantzas[3] to find diffusion coefficient as a function of concentration. They assume that the diffusion process is in the x direction and at each cross section there is a uniform concentration. They divided the diffusion length to several control volumes and discretized eq. (3‑48) explicitly and apply discretized equation on the control volumes, as follows:

In this equation only the diffusion coefficients are the unknown values. To solve this equation for the domain, two boundary conditions are needed. Guerrero-Aconcha and Kantzas assumed a constant concentration at the interface between oil and solvent (point A) as the first boundary condition and a no flow boundary surface at the end of medium (point B).

According to these two boundary conditions a discretized equation for the first and last control volumes are as follows:

By arranging the discretization equations within the medium domain and at the boundary surfaces, the Equations ((3‑49), (3‑50) and (3‑51)) can be written in matrix form as Ax=b. The components of vector x are the unknown diffusion coefficients. The diffusion coefficients can be obtained by solving the system of linear equations.