So for a water-oil system different relative permeability curves exist for:

Many reservoir systems fall between the two extremes, which does nothing to make laboratory water-flood data easier to interpret. However, knowledge of the two extreme cases allows misinterpretation of intermediate data to be minimized. 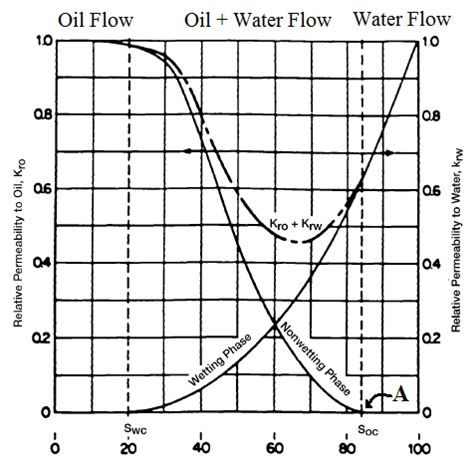 The curve shapes shown in Figure 2‑74 are typical for wetting and non-wetting phases and may be mentally reversed to visualize the behavior of an oil-wet system. Note also that the total permeability to both phases, krw + kro, is less than 1, in the region of two phase flow.

The following example uses capillary tubes and the HP equation to illustrate the effective reduction in permeability caused by introduction of second phase.

Total flow rate through these capillary tubes because of applying a pressure difference could be calculated, using the HP equation:

And the ratio of conductive capacities is:

And from Darcy’s law: 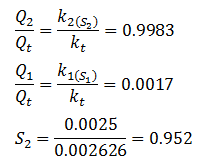 In this example the relative permeability values for the two fluids sum up to one. This behavior is not true in actual porous media. In real porous medium, there is a minute film of wetting phase that wet the surface. If consider this film in this example, it would decrease the diameter of the larger tube available for fluid number 2 to flow, thus reduces the flow capacity for the second fluid, and yet the film itself would contribute no flow capacity to the wetting phase. Thus the total fluid capacity of the tubes would be decreased. This is a rather normal feature of most relative permeability curves where sum of relative permeability values is less than one. 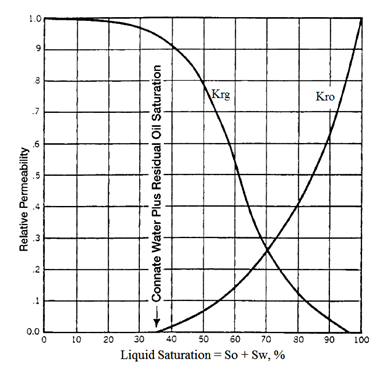 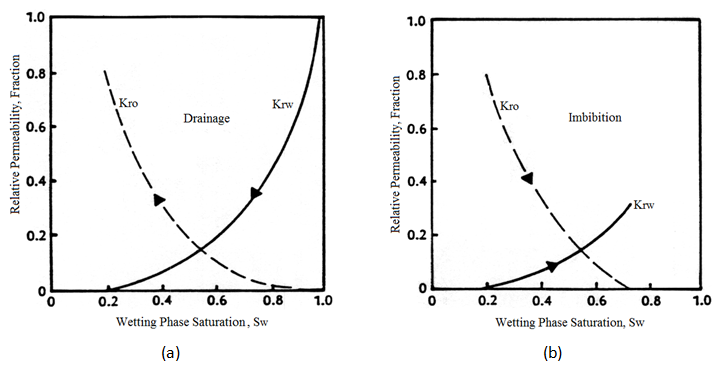 Figure 2‑76 show typical drainage and imbibition relative permeability curves for a water/oil system. The arrows indicate the direction of saturation change for each phase.